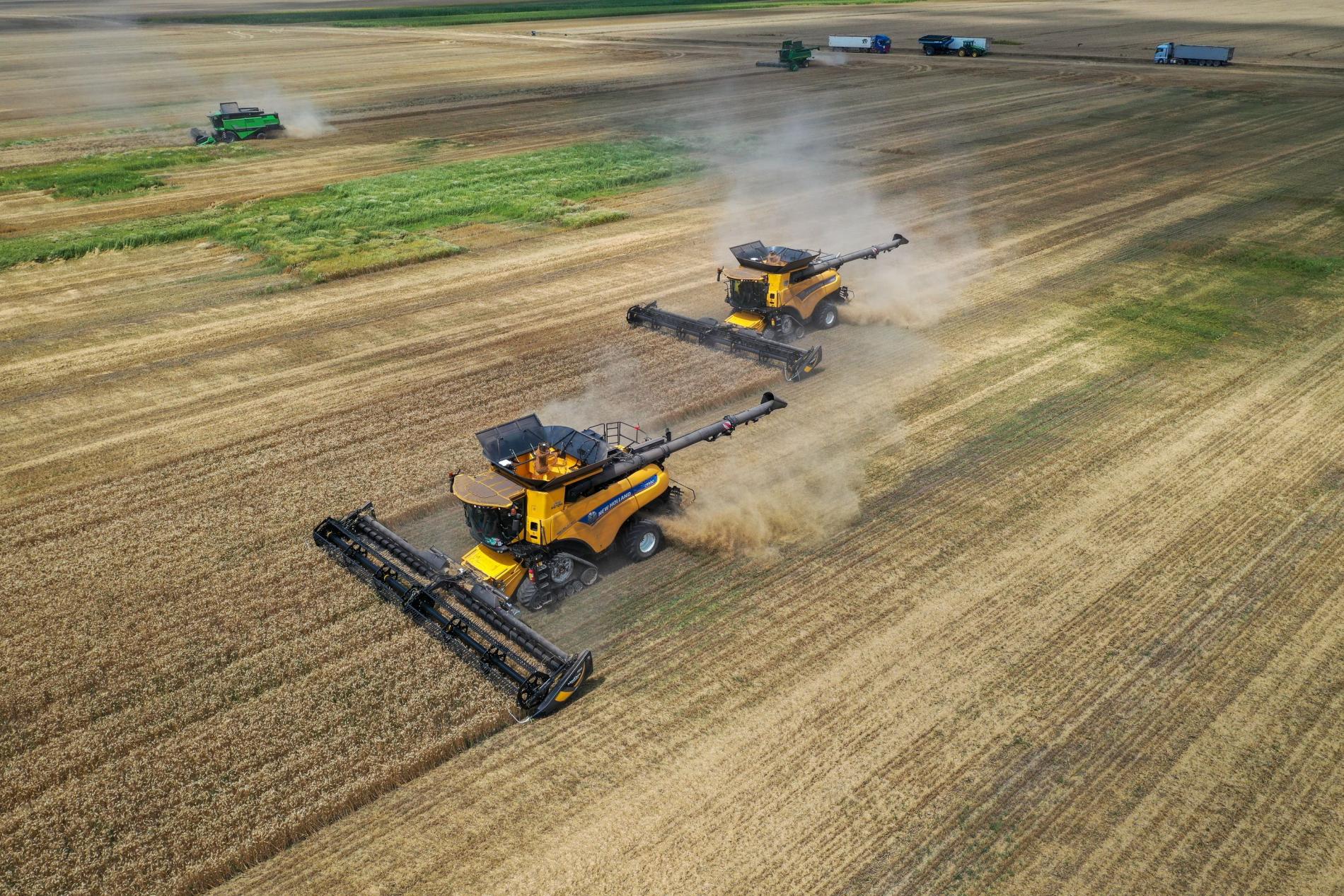 The shares of the agribusiness company Holde Agri Invest (HAI) started to trade on Bucharest Stock Exchange (BVB) Multilateral Trading System (SMT), also known as the AeRO market, on October 1st, the event being marked by the company through the official opening of the trading session at BVB headquarters. Holde Agri Invest is the first company to be listed on BVB after the Romanian capital market upgrade to the Secondary Emerging Market status by the global index provider FTSE Russell.

“Agriculture is an important component of the Romanian economy, with a contribution of 2.2% in the Gross Domestic Product in the first half of this year. Holde Agri Invest is doing an important step in consolidating the field of agriculture in Romania, which is still very segmented and, thus, cannot fully use its potential. According to Eurostat, in 2018, Romania ranked 6th among EU countries in agricultural area, with a total of 7.3% of arable land in the EU, but even if we are growing, we are ranking only 8th of the total agricultural production, with a production of EUR 18.6bn, respectively only 4% of EU total. These data demonstrate that Romania’s agriculture has a huge potential and that it can be used if we witness a consolidation of the players in this field. Diversity and segmentation are good, but when they lead to the fragmentation of a sector of the economy, they invariably also lead to problems accessing finance by small players. We want to see as many agribusiness companies as possible to follow the example of Holde Agri Invest and to attract money through the capital market and use that money for the acquisition of farms and for the development of agriculture”, said Radu Hanga, Bucharest Stock Exchange Chairman of the Board.

Prior to listing on the AeRO market, Holde Agri Invest conducted two rounds of financing by issuing new ordinary shares, attracting from the capital market investors a total of RON 22mn, as it follows RON 10mn, in December 2019, and RON 12mn, in June 2020.

”We are happy that through today’s listing, we are proving that even a start-up can raise capital from Bucharest Stock Exchange investors as long as it has a sound business plan, attractive growth prospects and a solid corporate governance implemented. We will continue to use capital markets instruments to continue our development. Our intention is to deliver more premieres to the market, including acquisitions of companies and extension of the arable land through share swaps and capital increases by contribution in kind in order to build one of the most prominent players in the Romanian agriculture sector”, stated Iulian Circiumaru, Iulian Circiumaru, Holde Agri Invest President of the Board.

Holde Agri Invest’s core business is the exploitation of agricultural land it owns or leases through the companies it controls. Holde Agri Invest’s vision is to position agriculture as part of the Romania’s future, by creating value and developing rural communities using state-of-the-art technology and experienced professionals. Currently, the company operates farms mainly in the southeastern part of Romania. This region of the country was chosen due to the quality of the soil, the large area of arable land, as well as the proximity to Bucharest and the ports on the Danube and the Black Sea.

The company’s business model implies purchasing existing vegetable farms, sometimes under-performing or with a capital deficit, in order to transform them into a modern and efficient operational company. Holde Agri Invest mainly targets farms of approximately 2,000 ha, but also smaller farms are targeted for the operational consolidation of existing farms. Holde Agri Invest expects to reach a turnover of RON 40mn at the end of this year and an EBIT margin of 17%.

”Agriculture is a capital-intensive industry, especially at the beginning, but once the business reaches a certain scale, it will reap the benefits indefinitely. Today, two years after formally establishing Holde we are proud to operate over 10,000 hectares of land and begin our journey on the Bucharest Stock Exchange.  We thank all the investors for trust they accorded us from the early days as without their support, we wouldn’t be able to undergo such an accelerated development. As we continue to expand our operated land, we also look at further investments in technology, modern tools and irrigation systems in order to perform state of the art, efficient agriculture in Romania” said Liviu Zagan, Holde Agri Invest CEO.

The idea of Holde Agri Invest project was conceived in 2016, by four Romanian entrepreneurs, Liviu Zagan, Robert Maxim, Matei Georgescu and Alexandru Covrig. In 2017, the founders joined forces with the team of the local asset management company, Certinvest, and in 2018, they formaly established Holde Agri Invest. Soon, the company attracted an external investment from Vertical Seven Group founded by entrepreneurs Iulian Circiumaru and Andrei Cretu. In July 2018, the company made its first acquisition, a farm of approximately 2,800 hectares in Rosiori de Vede area of ​​Teleorman county by taking over five companies and the existing mechanization center that serves the total cultivated area. In April 2020, Holde Agri Invest acquired the entire company Agromixt Buciumeni, a company founded in 1991, with Romanian capital, which exploits agricultural land in Calarasi county, reaching over 7,000 hectares of operated land. During 2020, Holde Agri Invest continued to expand and it currently operates approximately 10,000 hectares of agricultural land currently in operation. The company also owns a 10,000-ton silo and plans to expand its storage capacity to 30,000 tons by 2023.

Following the listing, Holde Agri Invest will continue to actively use various financing mechanisms offered by the capital market for the continuous development of the business. One of the growth methods already planned by management is the acquisition of companies and the expansion of arable land through share swaps and capital increases through in-kind contributions. Holde Agri Invest’s goal is to become one of the most important Romanian players on the local agricultural market, reaching a minimum of 20,000 hectares of land operated in the next seven years. To achieve this goal, Holde Agri Invest will invest over EUR 50mn in land acquisitions, new equipment, storage facilities, as well as modern irrigation systems.

The two rounds of financing through which Holde Agri Invest attracted RON 22mn were conducted by BRK Financial Group (BRK), as an Intermediary, and the brokerage company also acted as an Authorized Consultant for listing Holde Agri Invest on the AeRO market. In the second placement, together with BRK Financial Group – Syndicate Manager, also participated the brokerage company Goldring – Syndicate member.

“From the first contacts with the representatives of Holde Agri Invest, the project seemed a motivating one, especially since it would have been a premiere on the Romanian capital market from the perspective of the field in which they operate. The key persons within the Issuer, with relevant experience in agricultural production or in the financial and operational management of successful businesses, provided an additional guarantee for the success of the financing. The increased interest of investors at the time of private placements conducted by us, especially since June 2020 overlapped over a period marked by strong uncertainties related to the health crisis, made us confident in the future evolution of society both in business as well as from the perspective of the returns expected by investors. It is a good start on the stock market for this sector of activity, the company’s representatives have fully understood the advantages of using capital market instruments and we hope that other companies will soon follow this example. We are glad that we manage to be an active intermediary in the process of listing new issuers at BVB and we hope the future listing projects in which we are involved to be successful as well. We must not forget the collaboration we had in carrying out the second round of financing with our colleagues from Goldring, who were part of the Syndicate together with us “, said Razvan Rat, BRK Financial Group Deputy CEO.

”The signals that investors have been sending, consistently lately, confirm and strengthen the important position that the agricultural sector occupies among investment alternatives. This alignment of interests for agriculture from the economic and macroeconomic area, on one hand, and the capital market, on the other hand, sends an optimistic message for Romanian agriculture and economy. The Holde project for the capital market attracted and convinced us, primarily, because it reproduces on a micro scale the same convergence of vision and efforts between experts in the agricultural sector and, respectively, professionals in investment and financial management – an important added value for the future and the potential of the business itself. We are happy to see HAI shares on the stock exchange and look forward to Holde Agri Invest future projects”, stated Virgil Zahan, Goldring CEO.

More information about Holde Agri Invest is available in the Memorandum prepared for admission to trading and published on the BVB website, at this LINK.